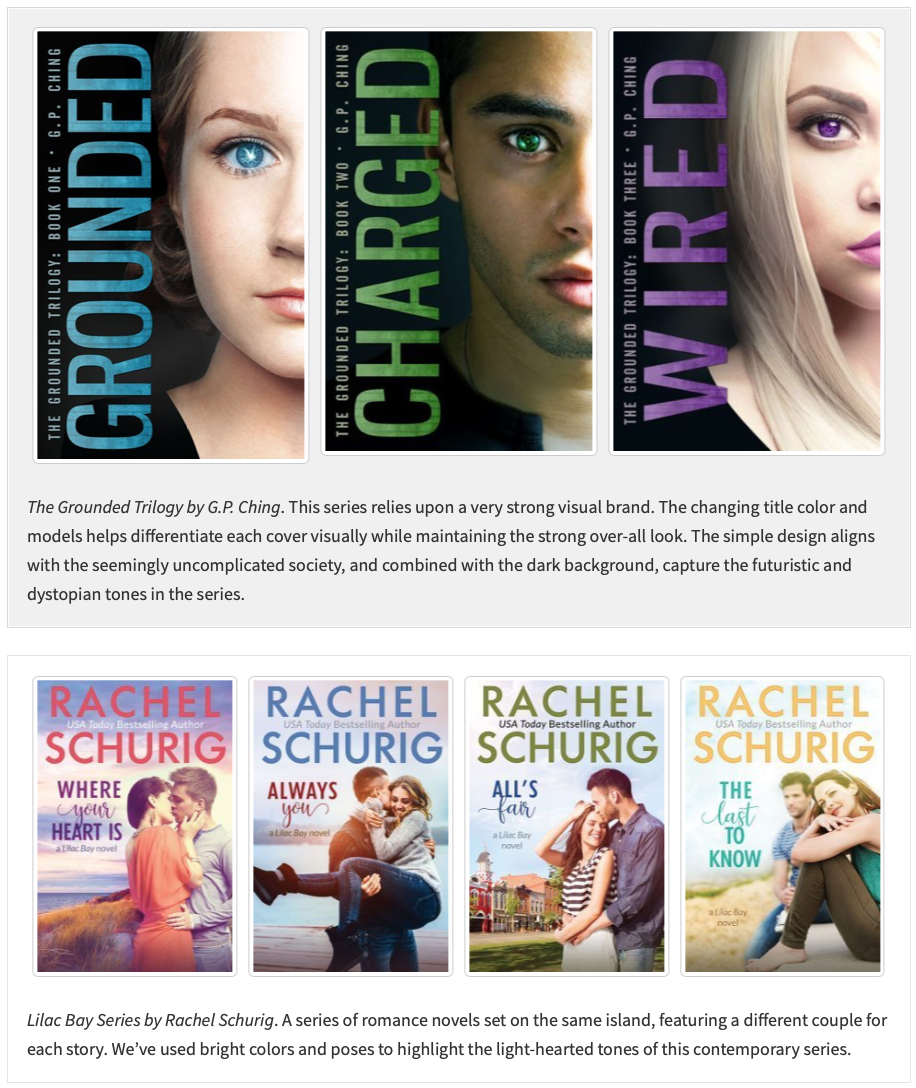 Series covers can be visually linked in a variety of ways. The most common are fonts and text placement, though over-all image tone, style and color schemes can also play a huge role. I’ve compiled a visual comparison of several series from Paper & Sage below.

Please click on the images below to see a larger version of each cover!

The Legacy Series by Jessica Ruddick. This series has a very strong visual continuity across titles, with the color and wing-shape as the primary changes across each cover. As a YA fantasy series about angels and the Grim Reaper, we wanted a strongly contrasting, monochromatic color scheme for each cover.

The Killer Love Story series by Jullian Scott. The dark color palletes underscore the similarly dark mystery and suspense elements of this series.

Lilac Bay Series by Rachel Schurig. A series of romance novels set on the same island, featuring a different couple for each story. We’ve used bright colors and poses to highlight the light-hearted tones of this contemporary series.

The Ransom Series by Rachel Schurig. Bold colors, a single model and the crowd image along the bottom tie these together visually to create a strong series look, clearly communicating that this is a contemporary romance series about a rock band.

The Lovestruck Series by Rachel Schurig. The first three titles in this series feature the same couple, then the last three have different couples in the staring role. The setting also plays a big role in each story, so we’ve highlighted that by featuring a watercolor-version of the skylines along the bottom of each cover.

The Triquetra by LB Crosher. The contrasting ‘glittering’ and black background, brightness of a single color, and abstract symbols highlight the magic and intrigue in this YA series.

The Weaver Series by Dena Nicotra. Like The Grounded Series above, there are several repeating elements (the title frame with a city and gears, a changing model, etc.), but the over-all design is a bit more flexible, which fits the time-travel and history-changing elements of the series.

The Cerenovo Series by Michael S. Nuckols. This sci-fi series focuses on how ‘the line between biological evolution and technological advancement blurs’. The covers combine those ideas along with relying on bright, eye-catching colors and a bold font for the title.

The Legends of the Woodlands by Angie Brashear. For this series, we wanted to incorporate a specific creature on each cover as well as sweeping landscapes behind the model to capture the epic-style fantasy genre. Then we chose to have the model turn toward the viewer as the series progressed, to help capture the YA protagonist’s growth throughout the series.

The Love and Star Stuff Series by Anya Monroe. For this playful series, we kept the placement of each element identical (title at top, couple sized and positioned the same in the middle, author name at the bottom, etc.) so we had a lot of flexibility with fonts and character details. Typically we recommend maintaining the same font throughout a series because that one element is a huge part of series cohesion, but in this case, by keeping the other elements aligned, we took the chance to play with the fonts and have them really set the tone for each book.

The Pepper Brooks Cozy Mystery Series by Eryn Scott. Eryn Scott’s Pepper Brooks mysteries are visually very different from her What’s in a Name? covers (shown above). We chose vector designs for this series because they are associated quickly with the cozy genre and are quite different from the photographic designs for her other covers, which helps set these cozy mysteries apart from her chick lit and romance titles.

What’s in a Name? by Eryn Scott. This is a light-hearted and comedic women’s lit series. We used bright, eye-catching colors and playful poses and expressions to highlight the genre and tone. The titles can also be read as standalone, so we wanted to keep that in mind, too.

Never Too Late, Her Last Words, The Runaway and Blood Sisters by Jo Barney. Similar to A.J. Waines’ covers, these are strongly branded, but individual titles from Jo Barney. We’ve kept the fonts and capitalization scheme consistent throughout, but the layout, imagery and color palettes remain very flexible. As standalone titles with a strong visual brand, we want these covers to be obviously linked and recognizable as Jo Barney titles, but we don’t want to compromise the flexibility for very different (aka non-series) stories.

Coming Home Short Stories by Kristi Rose. These short, sweet romantic reads all take place in a small town, with each story featuring a new couple. They’re fun, lighthearted reads so we relied on bright pops of color for the titles and a close-up shot of a couple for each of the 5 short stories. The sixth cover featured above, Love Comes Home, is the collection cover, so we’ve cropped that couple differently to create a similar, but different look to set it apart as the Collection cover.

On Hold series by Julia Kent and Elissa Reed. We wanted to focus on a bold eye-catching title and author names on these covers. These are loosely linked to Julia Kent’s Billionaire series, so we also wanted to have a san serif and hand-written fonts as a subtle visual tie-in, but still give this series a look that’s unique.

The SoulNecklace Stories by R.L Stedman. The structured title layout and symbol at the bottom of the cover allowed for a lot of flexibility in the cropping and tones on the model and setting images for each cover.

The Dark Skies Trilogy by Lisa Daley. The trilogy maintains the same fonts, model and over-all color scheme, but with a very flexible background to reflect the storyline. The fourth image seen here is a Prequel for the series. We’ve kept the text placement and textures, but significantly changed the cropping of the image, to highlight the fact that this is a different type of story, though still part of the series.

The DS Catherine Bishop Series by Lisa Hartley. We wanted to keep a high-contrast, gritty tone for this crime series. Like the On Hold series above, these covers rely on a black and white image and a colorful title. However, the tone is very different to match the crime genre: note the richer, darker color choices for the title and accents and the higher-contrast black and white of the images used, along with the rough textures and fonts.

Categories: Articles, Design
Recent Posts
Testimonials
My first book by Jessica Ruddick, and I have to...

This book was as beautifully written as the cover.  By...

I gotta say that this book has SO MANY goods!...

Sasha, Goodreads Review for Meet Me in the Middle by Eryn Scott

I think the different available services, from pre-made to the...

Laurie Baxter, A Charlie Brown Christmas & Who Does He Think He’s Fooling?

I really enjoyed working with Christa. The process was easy,...

I like that I have my own week to hunker...

George Kayde, Knight in Training & Pix of Me and You

I fell in love with Paper and Sage the first...

Christa is a joy to work with.

Lana Voynich, Away from Here

Thank you for making my novel come to life with...

B.M. Sandy, Someone to Stay

The process was painless. I expressed my ideas and Christa...

I loved that Christa listened and took on board everything...

Christa was professional, receptive to my vision, and a true...

Working with Christa was thoroughly enjoyable! …[I]t’s easy and well...

[Christa] offered detailed explanation[s] of every step … and included...

Theresa Sopko, Bewilderments of the Eyes

My narrator said my beautiful cover was one of the...

I was really impressed that Christa took the time to...

Christa is friendly, understanding, fast, and designed a cover I...

Eryn Scott, The What's in a Name? Series

Everything was perfect. You embraced my vision and designed an...

I loved the huge selection of premades. [A]ffordable and…beautifully made.

...Christa was amazing with responding to my emails. I asked...

Jami Wagner, Date in the Dark

I had a great experience working with Paper and Sage....

Although it bills itself as a pre-made cover outlet, P&S...

If you’re looking for a skilled and affordable designer, look...

DS Black, The Stubbs: A Novella

It was really easy and friendly from the start. Very...

A.J. Waines, Girl on a Train

I love how I sent Christa so much information and...

S.M. Smith, A Boy Worth Choosing

Super friendly and prompt feedback and delivery! Christa is a...

[Clients of P&S are] getting a quality product that’s incredibly...

Cheyanne Young, Not Your Fault

Christa is a talented artist, who really listens to the...

It was so easy to make changes and approve the...

Gia Riley, Between the Pain

Working with Paper and Sage was awesome – I enjoyed...

I’ve been looking into cover designers for a bit, and...

People should know that they are in good hands entrusting...

I could not be happier...and I will definitely come to...

As soon as I looked at Christa’s beautiful website I...

I was initially drawn to this book because of the...

JG, Amazon Review for A Necklace of Souls by R L Stedman

...Overall, a brilliant book and, not to mention, the cover...

Amazon Customer, Amazon Review for Mind of the Phoenix by Jamie McLachlan

I have to say that the cover of this book...

Rachel Lightwood, Amazon Review for Maggie and the Mercury Retrograde by Anya Monroe

I picked up this book based on the outstanding cover...

Maxx24, Amazon Review for The Standout: A Robin Bricker Novel by Laurel Osterkamp

The cover of the book is amazing. The author of...

I was really intrigued by this book mainly from the...

Nicole, Amazon Review for He’s The One by Kristi Rose

…Simple by Dena Nicotra has an eye-catching cover (especially the...

I picked up this book because of the cover but...

Jess, Amazon Review for The Ghost of You by Amanda Burckhard

…This is Christian YA at its finest starting with an...

Kara Grant, Amazon Review for Of the Persecuted by Angie Brashear

The cover of this book caught my attention right away...